Graduate with a Plan. Opportunities for All. Academic Excellence. Live with Character 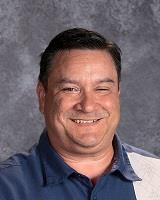 Mr. Bray is a native of Kingsburg High School and attended Kingsburg Schools and participated in sports and school activities. Upon Graduation, Mr. Bray attended Idaho State University on a Basketball Scholarship and also attended Merced College and Cal Poly Pomona where he was On the Cal Poly Dean List, CCAA All Academic Team and 6th Man Award winner.

After completing his studies at Cal Poly, Mr. Bray entered the law enforcement field where he completed a 27 year career with both the Merced Police Department and Fresno County Sheriff's Office. During his career, Mr. Bray was assigned to patrol, investigations, administration, training, boating enforcement, hostage negotiations and the Honor Guard. Mr Bray retired in 2013 with the rank of Sergeant and entered his second career in education.

You can add a copyright statement or legal disclaimer in this area if necessary.
Copyright © 2002-2020 Blackboard, Inc. All rights reserved.